The Ansoff Matrix, also known as the Ansoff product/market Growth Matrix, is a strategic planning tool used to analyze and generate four alternative directions for the strategic development of a business or corporation. In a nutshell, it helps executives, managers, and marketers with business management by analyzing strategic options for further growth while considering the potential risk of each option.

The Ansoff Matrix was named after Igor Ansoff (1957) after it was published in the Harvard Business Review with an essay named “Strategies for Diversification”. Essentially, it breaks down growth options in relation to new products and markets, as well as existing products and markets. Ultimately, it provides the following options: 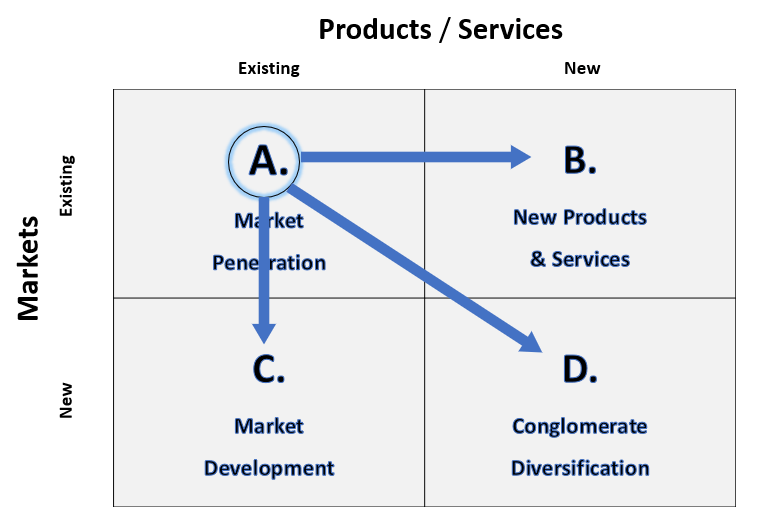 How to use Ansoff Matrix

As mentioned above, the Ansoff Matrix is used by decision-makers to essentially manage the scope of the corporation’s portfolio. Managers and executives need to decide which of the possible four strategies is more beneficial and potentially less risky for their business or corporation.

Since the market is one of the two variables that comprise the Ansoff Matrix, the tool has been commonly defined as a marketing planning tool. However, it is mainly used on a corporate strategy level, rather than within the marketing department of a business. That’s because growth decisions have a long-term impact on the whole corporation and require an all-encompassing analysis of the corporation’s portfolio scope before being taken.

Benefits of the Ansoff Matrix

What's the easiest way to have your company playbooks in one place?

Managing Scope of the Corporation Portfolio

As mentioned above, there are 4 different growth strategies that a corporation can select from.

Since it builds on the organization’s existing strategic capabilities, it does not require the company to venture into unexplored markets and products. As a result, it provides a lower amount of risk because essentially the organization’s scope remains unchanged.

Despite this being a relatively safe approach, it faces several potential concerns:

Increasing existing market share by focusing on market penetration will likely increase rivalry within the industry. With competition getting fiercer on the same range of products, problematic situations such as price wars or expensive marketing campaigns can arise. This is likely to increase the cost and efforts for penetrating the market. In most cases of market penetration, only the companies that possess a clear competitive advantage are able to grow their market share.

Usually, the competitive advantage being inimitable. When facing fierce competition, it might be easier all together to acquire most of the struggling competitors and consolidate all of them within one company. This way you can move rapidly towards gaining the largest market share in your industry.

Sometimes it is simply not the right time to focus all marketing efforts on penetrating an existing market. If the market is bearish, i.e: the market is experiencing a downturn and a severe decline in stock prices, then it is better to “play dead”. Instead of spending resources on penetrating the market, it can be far more beneficial to diversify the organization’s scope. When such a thing happens, you would be moving from Quadrant A of the Ansoff Matrix to any of the Quadrant B, C, or D.

Deciding to penetrate a market further implies the end goal of gaining the largest market share within that specific industry. In most countries, however, there are regulators who try to keep under control organizations that gain excessive market power. Most constraints try to delimit and restrain mergers or acquisitions that can greatly increase an organization’s power.

Practical Example
An electricity-providing company experiences growth and tries to merge with another electricity company within the same country. In most cases, they will both face several legal regulations. In Europe for example, the European Commission can intervene in any link of the European Market and force companies to reduce their power in order to allow ways for competition to develop.

When it comes to market penetration, there are two general ways to go about it:

Product development in the Ansoff Matrix is the approach in which organizations deliver either new products or modified products in existing markets.

In marketing, this is also referred to as product line extension. Usually, it involves higher risk because it contains varying degrees of diversification. When creating new products, some companies use the same core technology. This lowers the risk arising from developing completely new technologies.

A typical example would be Apple’s core operating system. Apple started growing with the release of the iPod in October 2001. Apple then moved on to producing the iPhone, the iPad, the iWatch and so on…

The core technology used behind each of the products produced by Apple is essentially the same one. They took the same operating system (continuously updated of course) and used it to create new products while targeting the same market. Certainly, the products created by Apple serve different purposes. As such, they require great efforts from their Research and Development Unit.

So what are the possible risks accompanying the product development strategy of the Ansoff Matrix?

Practical Example
The most typical example is that of Tesla and their Model 3 sedan. Early customers placed deposits for the first Model 3 starting in March 2016. However, Tesla then notified most customers that their Teslas will be delivered in “early 2019” instead of late 2018.
Additionally, Musk pushed back several times his initial goal of building 5000 Model 3 sedans per week by the end of June 2018. Most of these delays are being caused due to unexpected problems in building the new batteries for the car. The new lithium batteries require different ways of manufacturing and because of several bottlenecks, the company has not been able to deliver the components on time.

Market Development, as a strategic option of the Ansoff Matrix, provides an alternative to risky and expensive Product Development strategies. It works by offering the organization’s existing products and services in completely new markets.

In most cases, market development requires an effort in product planning and development as well. They go hand-in-hand. If a company is extending its geographic reach and starts targeting European markets in addition to the US market, then the products might need to go through several alterations. At the very least, the product’s packaging will need to be different. The languages used to describe the nutritional information of the product will be different from the English packages. Additionally, the way it is branded might be different due to trends and differences that might have been discovered between European and American populations.

The strategy itself can comprise one or more of the following forms:

The problems and risks mentioned in the Product Development quadrant of the Ansoff Matrix can arise in a Market Development strategy as well. Several business planning tools can help you analyze the market before entering it. Two of the most common tools used for analyzing the environment are the PESTEL analysis and Porter’s Five Forces.

Diversification is by far the riskiest strategic option of the Ansoff Matrix. It is a strategy that radically shifts the scope of the organization by entering completely new markets with completely new products.

Surely, diversification exists in almost every quadrant of the Ansoff Matrix. Even when entering new markets or when creating new products, an organization goes through some type of diversification. However, the Ansoff Matrix clearly helps us visualize the extent to which a company has to diversify when moving away from its existing products and markets.

To be more specific, moving from Quadrant A (Market Penetration) to Quadrant B or C requires less effort on the company’s side then moving directly to Quadrant D (Diversification).

When taking up such a radical strategy (within the Ansoff Matrix), there can be several reasons:

Practical Example
Most universities have facilities and buildings that are not used year-round. During the summer there are almost no full-time students. At least in the American Educational system – the European one works slightly differently.
As a result, most universities end up using their facilities for conferences, summer camps and so on. An even better example would be that of AWS. Amazon already possessed server facilities with great computing power. Most of it, they were not using on a continuous basis. As a result, Amazon decided to offer cloud services to users all over the world.

This factor builds upon the economies of scale concept described above. However, instead of considering the employment of existing resources into new markets and product segments, we consider the managerial parental capabilities.

Overall, it is important to analyze the environment before deciding to diversify. Several companies decide to partner up in order to commonly utilize each other’s resources. The ultimate goal is to achieve the right synergy and thus drive growth. Sometimes, negative synergy can be more detrimental than no synergy at all. Meaning that sometimes it is better for different companies not to try complementing each-other.

Practical Example
One of the best examples of positive synergy would be that of Disney and Pixar. Disney acquired Pixar in 2006 at a valuation of $7.4. Since then, they made more than 10 full-featured animated movies. All of which grossed more than $360 million each, ultimately granting Disney a gross profit of over $5 billion over a time frame of 12 years.

There are cases, however, in which two businesses can result in negative synergy.

Practical Example
The acquisition of Snapple by Quaker Oats was by far one of the biggest failures in the history of mergers and acquisitions. Quaker Oats was not able to bring any added value to the acquisition and practically did not know how to run that specific business. As a result, they ended up losing roughly $1.6 million for each day that they held onto the company. Until they sold it, that is.

Such synergies result in value destruction rather than value-adding.

Related diversification – include activities that can be beyond the current products or markets of a company, but still remain within the capabilities of the company’s value network.

Unrelated diversification – you probably have guessed already that this covers the development of products and activities that are not part of, or manageable by the existing capabilities or value network.

As a general rule of thumb, a deep-level analysis has to be done before diversifying into different activities. Each individual diversification needs to be tested in terms of relatedness to the organization’s capabilities. Otherwise, it can be turn out to be more detrimental. The Ansoff Matrix is probably one of the most widespread tools managers use in strategic planning for most organizations. It is easy to understand and allows decision-makers to visually represent the organization’s scope of work. In combination with other tools, such as the Ishikawa Fishbone diagram, it can efficiently help teams anticipate and calculate risk throughout the whole project management process.

We hope to have covered most of the concepts related to the Ansoff Matrix. Now it’s time to use it to drive growth.

If you think we missed something or would like to know more regarding Ansoff Matrix and how to make organizational decisions for driving growth, let us know in the comments section below.

Design a step-by-step procedure or approval workflow once. Run it a hundred times - instantly.

Design and run your workflows in minutes. It's amazingly easy and deliciously powerful.