Nowadays it seems like everyone is throwing around terms such as “blockchain”, “bitcoin”, “ethereum”, “smart contracts”, etc. These have become buzzwords, and oftentimes the people spouting these words do not truly understand what they are. In order to provide an introduction to smart contracts, and give clarity to these other buzzwords, the following timeline was made:

In 2009, Bitcoin was launched. This first virtual currency was introduced by the anonymous founder(s) who took the name Satoshi Nakamoto. Bitcoin operates in a decentralized network between parties in which the virtual currency is transferred and authenticated by the network and its users.

Shortly after the explosion of Bitcoin, blockchain technology was discovered by looking into what drives the Bitcoin network. Blockchain is the general term that describes the decentralized public ledger of all transactions executed. “Decentralized” is a term that gets thrown around a lot when talking about blockchain. Basically it means that there is no controlling entity for the system. For example, for the United States currency, the Federal Reserve is the controlling entity behind it; the Fed controls how much cash is circulating, how much the banks have, and how high the interest rates are. For the US, the currency system is “centralized” because the Fed controls it. In a centralized system like this, the people have to trust that the controlling entity (the Fed in this case) is operating without dishonesty. In a “decentralized” system like the Bitcoin network, all of the transactions are public and viewable. Therefore the possibility for fraud is eliminated since all participants have access to view and verify the “blocks” (transactions) in the chain. Since the transactions are public, there is no need for a central controlling entity. People realized that this blockchain technology could be applied to a plethora of different industries, not just Bitcoin.

What are smart contracts?

Smart contracts are self-executing agreements with the terms between the buyer and seller written in the computer code itself. Smart contracts get rid of the need for intermediaries. The smart contract ensures that transactions between parties meet the requirements of both parties, otherwise they won’t execute and the transaction will not take place. 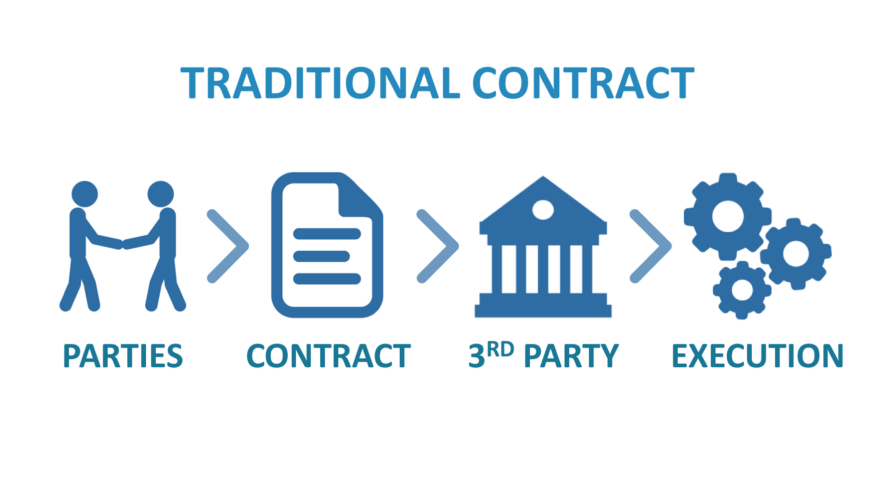 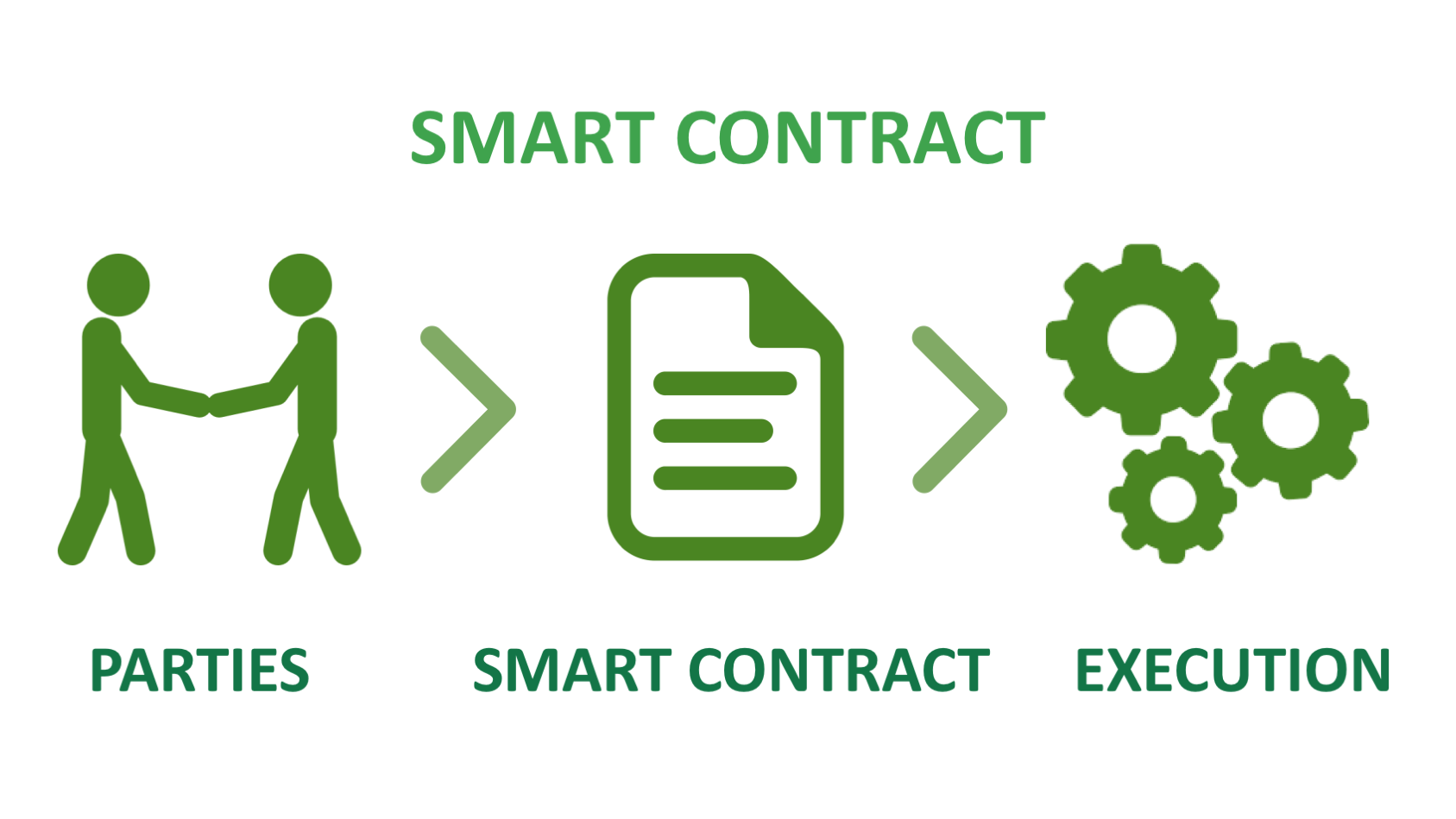 The vending machine has these rules coded in itself and protects the soda bottles (doesn’t dispense them) if the required fee is not paid.

How do smart contracts relate to blockchain?

IBM: Blockchain integrated in supply chains allows transparency because of the shared record of transactions in a network. Incorporating smart contracts and block chain in their supply chain operations allows IBM to keep track of materials and orders in real time without chance for error.

Food: Complex supplier-buyer pathways in the food industry make it difficult to track down the source of food-borne illnesses. Blockchain will improve the ability to figure out where along the supply chain food was contaminated.

The mortgage industry will be reformed by blockchain and smart contracts. Buyers and sellers will be easily connected automatically in the blockchain network. Smart contracts will govern all of the specifications of the real estate transaction. This will eliminate the need for lawyers and realtors. This change will make these types of deals more efficient, saving money and time for both parties.

The escrow industry is worth billions; real estate escrows, for instance, charge a fee of 2 percent of the (purchased) property value in order to hold and secure purchase funds until the conditions of the deal are satisfied. This is a service that can be directly replaced with the implementation of smart contracts. Instead of using escrows in real estate purchases, the new system would look a little different. The buyer would buy virtual tokens (Ether or Bitcoin) and send them to a location on the blockchain network. The tokens remain at that address until the computer programmed smart contract validates that all the required conditions in the purchase deal have been met. These conditions could include: entering information on the deed, or uploading a pdf of a house inspection certificate or a signed deal contract. When the deal has all of the required elements that the smart contract calls for, the funds are automatically released to the seller party, who is able to exchange them into actual currency. The convoluted escrow process, and need for a middle man in real estate transactions, disappears and becomes automated with the implementation of smart contracts.

For medical doctors and PhDs actively conducting research, sharing data and collaborating between various hospitals freely and openly is a benefit smart contracts can create. New discoveries can be easily communicated without disclosing the personal information of the subjects who took part in the study.

Smart contracts transform the way international goods are traded by improving and streamlining the exchange of funds in the transaction. Smart contracts help to make international trades more efficient by allowing the two parties to enter a direct agreement with each other, eliminating the need for one party to park their money with a third party intermediary. Trust is easier between the two parties because the smart contract makes the transaction unbreakable.

Smart contracts will make the relationship between insurance companies and customers seamless. With the use of smart contracts, both sides and come into an agreement without the need for verification from lawyers or notaries. This elimination of labor would save billions, and this cost benefit will eventually trickle down to the consumer. This system would decrease the possibility of fraud, and make court settlements much more black and white. Unfortunately for scammers (but fortunately for honest people!), a decentralized public blockchain network utilizing smart contracts will make it much much harder to defraud people and go unnoticed.

The manager of an online shop or another type of website could set up a smart contract that would automatically pay marketers if their advertisements have success. For instance, the marketer that published the advertisement for the online shop would create an Ethereum or Bitcoin account with an amount of funds in it and link it to a smart contract written with if/then conditions. For example, if an internet browser comes across the advertisement and clicks it, and that click results in a sale on the online shop, then the Ethereum account would release a set fee (a couple dollars worth) to the marketer’s account.

On the customer side, all you have to do is figure out what transactions you want to automate using smart contracts, determine the savings (monetary or not) that this automation will bring to the business, and ask one of these developers how much they’d charge to create this custom smart contract. From there, you just need to crunch the numbers and decide if it’s worth it. The technical literacy required to code a smart contract is highly valuable, and will become more and more marketable as this technology continues to disrupt industries around the world.

What other applications do smart contracts have?

Other smart contract uses include but are not limited to: 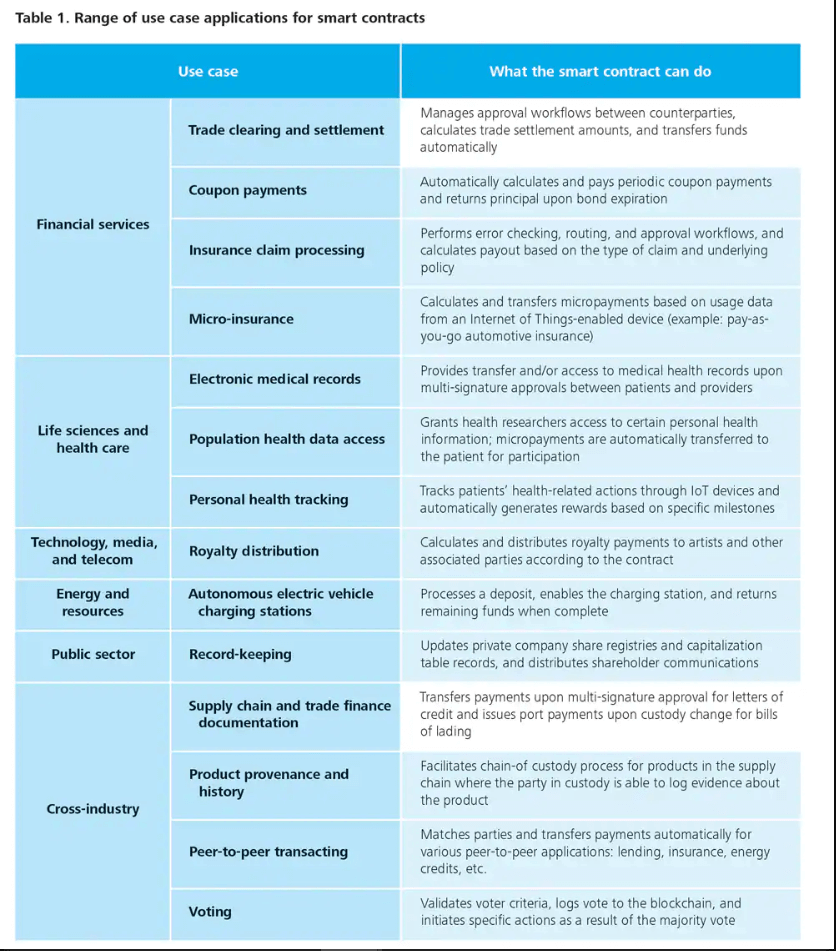 Potential of Blockchain and Smart Contracts

The future potential of smart contracts is vast. While the current applications of this technology are still being utilized at a fairly small scale, extremely large scale applications are possible as we continue to progress. Smart contracts, at the most fundamental level, are agreements. A business, for example, at the most fundamental level, is simply a collection of agreements made in the past, being made currently, and to be made in the future. Sales to customers, approvals between employees, purchases from suppliers, and other expenses all have the potential to be automated on the blockchain via smart contracts.

The final form of automating businesses with smart contracts is the creation of fully-automated businesses, which are an example of a DAO (distributed autonomous organization). All processes and business operations are completely automated, and the organization itself operates without need for human intervention. The actual business itself would just be a collection of smart contracts. While DAO’s exist today, most are very small and limited in scope. For a DAO to be functional on a large scale, blockchain technology would have to be more integrated into society and a higher degree of societal automation would have to be in place. Completely automated governments and societies are what lie beyond the potential of DAOs. An automated government would be similar to a DAO, except in this case government services are automated, compared to business processes.

Energy use and Environmental Implications of Blockchain

The major problem for the blockchain based cryptocurrency, BitCoin, is the astronomical environmental impact the network has. The BitCoin network uses so much energy, that the carbon emissions associated with BitCoin is equal to the emissions from 2.36 million cars annually. The BitCoin network requires so much energy because of its mining process. BitCoin “mining”, as it is called, involves computers in the network trying to solve complex math problems to receive a fragment of a coin. The answer found by the computer is then instantaneously checked by the network, which also takes loads of energy. It’s is intuitive as to why the BitCoin network requires so much energy to be powered. It is a decentralized network; it takes much more energy to power a network with thousands of “headquarters” than to power a network with one or a few “headquarters”.

Some efforts are being taken to reduce the carbon emissions associated with BitCoin. For example, in China, a lot of mining operations are being powered by renewable hydroelectric dams. It is important to realize that the massive environmental impacts are linked more to cryptocurrencies, and less to blockchain in general. The sheer scale of cryptocurrencies only serve to enlarge their carbon footprint; comparatively, smaller blockchain networks would have little environmental consequence. All in all, energy consumption has been the main critique for the BitCoin system. However, BitCoin was the first real-life application for blockchain, and it is expected that newer blockchain technologies that aren’t so environmentally detrimental are on the horizon.

“The blockchain technology that will replace lawyers”…Not quite

It’s not accurate to make blanket statements such as “smart contracts will replace all lawyers”. This is simply not the case. Smart contracts, at their core, are not “smart” like a human. They do increase efficiency. They are computer programs and save a lot of time, yes, but when it comes to issues such as breach of contract agreements, a real human lawyer and judge will need to determine what rules were broken. With many massive companies turning to blockchain technology, it is clear that smart contracts will come to play an important role in how transactions take place in the future, but it is important to realize that the scope of smart contract uses is limited by what industries choose to use them.

If you’re looking to use Tallyfy to run smart contracts – we have an open API that enables you to do so. Please schedule a chat with us!